How did I miss this at the time? A mind-blowing piece of agitprop/art put together by Darren Cullen with director Price James and others for Veterans For Peace UK back in 2015.

As a childhood fan of Action Man, a would-be boy soldier (but for OfC cutbacks and downsizing), and yet also of a certain political persuasion, I find it utterly chilling. I hope that it helped VfP get its message across.

Plenty of other great stuff on Cullen’s website too, and he has a short exhibition of new sculptures up in That There Lunnon at the beginning of October.

H/T: John Freeman at Down The Tubes

After reading about the Know Nothings on the Smithsonian Magazine website (note: it seems that the bare existence of history offends some Trump supporters), I then saw one about the Lykov family.

The Lykovs were a family of Old Believers – proper old skool Orthodox types – who in the late 1930s fled east into the Siberian wilderness or ‘taiga’ in fear of Soviet purges and suppression of their religion. They forged a life for themselves, just about, living off the bounty of the land (which sometimes isn’t that bountiful, especially when it’s minus forty degrees; the mother, Akulina, died of starvation in 1961).

They completely avoided contact with the outside world, with any strangers from outside their small family group, for forty years, until 1978 when a party of passing geologists spotted them and dropped by to totally freak them out with tales of men on the moon and television and flared trousers. It was enough to kill off the three oldest offspring in 1981, leaving just the ageing patriarch Karp and his youngest daughter Agafia (born 1944). Then old Karp popped his clogs in 1988, on the anniversary of Akulina’s own passing.

Since then Agafia’s been the last Lykov remaining. In 1997 a retired geologist (what is it with these rock-botherers?!) decided to come and live nearby to help her out, but seeing as he was older than her, hadn’t lived his entire life in the taiga, and was, uh, a one-legged amputee, it seems she was doing most of the helping. He died in 2015. In early 2016 Agafia herself was airlifted out for medical treatment. Not sure if she’s returned.

Anyway, there’s some great documentaries about Agafia and her family out there; even the Russian language ones are worth catching for the footage.

(It reminds me a little of the story of Lieutenant Hiroo Shinoda, the ‘last of the holdouts’ (though he wasn’t), who hid out in the countryside of the Philippines for nearly twenty years after the close of the Second World War until rooted out by young hippie explorer Norio Suzuki.)

Police provocateurs (or possibly fascists of the Golden Dawn/Χρυσή Αυγή) line up alongside riot police in Hania, Crete, to threaten those protesting against the state, police brutality and the senseless slaying one year ago of fifteen year old Alexis Grigoropoulos.

Anyone getting a sense of déjà vu..?

It’s been taking a long time to wade through all the available material and make some kind of sense of it, so I’m a bit late going through the footage of the dog attack on Cornhill.

This took place around 7:16pm on 1st April, shortly before the deadly assault on Ian Tomlinson, and which involved several of the City of London dog handlers (D3, for example) also present when Ian Tomlinson is put to the ground.

But one thing of note is the apparent presence of ‘A’, the officer who later batons and pushes Ian Tomlinson. See the following pictures from each incident, and make up your own mind whether they are the same officer:

After the moment captured in the screengrab from the ‘dog attack’ video, officer ‘A’ (if that’s who it is) exchanges looks (and possibly words) with the blue-flashed hi-vis jacket-wearing officers to right of screen (suspected FIT cops), before moving off into the cluster of cops around the corner of Threadneedle Street and Royal Exchange Buildings. Some of those officers head down Royal Exchange Buildings in the direction of Cornhill, before the videographer gets distracted by the big build up of riot police to his/her left, who then charge round the corner into Royal Exchange Avenue.

The general make-up of the group heading down Royal Exchange Building (as opposed to the surge into Royal Exchange Avenue) appears to match up with the beginning of the ‘American tourist’ video – some riot police with helmets and shields, the balaclava’d up shieldless left-handed officer, suspected FIT cops and dog handlers.

If one considers that the ‘dog attack’ incident to the north end of Royal Exchange Buildings and the Tomlinson assault to the south are connected by a number of police personnel and a short period of time (ie that some of those at the ‘dog attack’ then dash down the path to the location where Ian Tomlinson is then assaulted, all in a short space of time), then it would appear that the police officer who actually batons and pushes Mr Tomlinson talks to or takes some form of instruction from one or more police officers in the blue flashed hi-vis jackets before moving off from the ‘dog attack’ incident – as do other officers in the group we see in the assault footage. This might indicate, we may speculate, some level of command or control.

(This is, I note again, only speculation. Perhaps there were a number of left-handed baton-wielding riot cops with no epaulettes, high cut hi-vis jackets, balaclavas, trousers tucked into their boots, Nato helmets and no shields running around the Royal Exchange area of London between 7:16 and 7:20pm on the 1st of April. Hopefully they will all be making formal statements to account for their own actions and to bear witness to what they saw.)

As the evidence is assembled and analysed it may well be possible to piece together not just a chain of events, but the reasoning behind it, right down to who said what to whom at what point.

It will not be enough for one cop to face punishment for his actions, when his actions were but a side-effect of a tactic, a strategy, a doctrine, a policy. Responsibility lies in the fist gripped around a baton, but also in the command centres and briefing rooms.

NB: The times on the pictures above are approximate. The YouTube uploader of the ‘dog attack’ video states that they are unaware of whether the 7:16 timestamp refers to the beginning or end of the film. The moment pictured comes 1′32″ into the video. 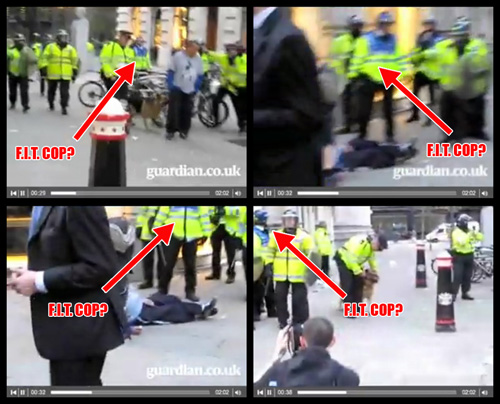 So, are these FIT officers? There are several more milling about in the Ian Tomlinson assault video, but it’s a bit too choppy to see much on the YouTube version.

Commenter Ed on Ian Bone’s blog has suggested that Stephen Discombe CO2558 might be present.

Reuploaded from the original on IndyMedia.

I originally posted up the following as a comment accompanying a link to the video on Ian Bone’s blog, but seeing as someone else has cross-posted the text elsewhere, I might as well add it here too:

There is a very clear video of the police violently wading into the hippies at the climate camp on Bishopsgate up on IndyMedia.

Whatever you or I might think of the politics of the climate camp, or indeed of fundamentalist non-violence, the video lays bare the function of the police force in all its naked, violent, powermonger-protecting glory.

And the individuals who choose to join the police, who then – day by day, situation by situation – choose to carry out orders which include, as here, acting as an anonymous, homogenous bloc of brute force, beating, bloodying, slavering over peaceniks who don’t even defend themselves despite the shields and the batons, well… I think we all know what sort of people they are. I think we all know how big and brave they are when they face anything resembling a fair fight.

Bristle's Blog from the BunKRS
Create a free website or blog at WordPress.com.